Since the pandemic the macro-economic situation has changed dramatically. I don’t think this is a sudden change whatsoever, but a acceleration of the developments we have seen since the last financial crisis from 2008. Interest rates going down and exploring negative territory with states funding their investments with debt by printing more money. 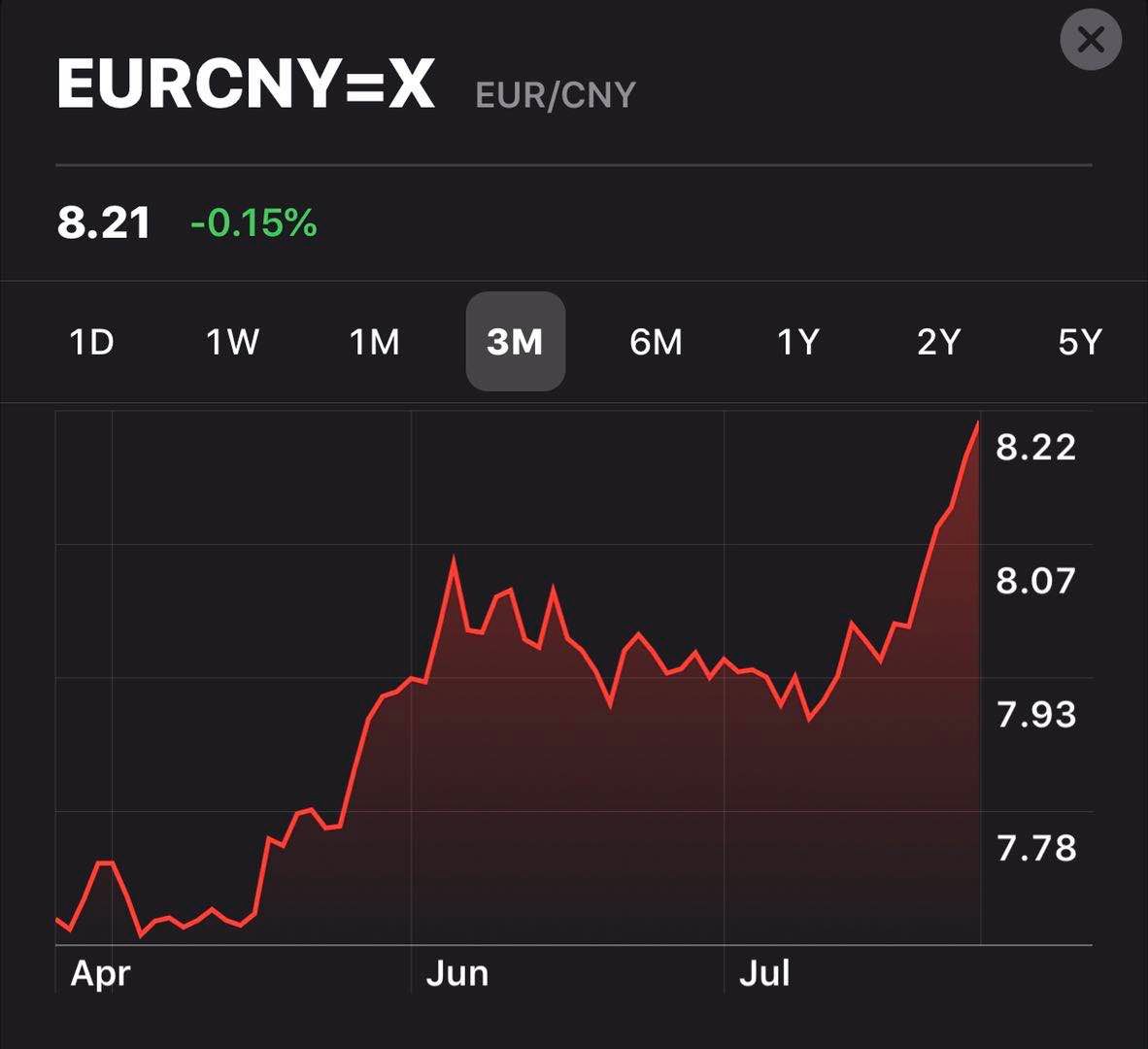 In a German WeChat group someone posted the above chart yesterday, and exclaimed “What the heck is going on?”. So what has been going that would make the EUR appreciate over the RMB so heavily, all the while the ECB and EU are pumping out trillions to stabilize the European economy? Well, Corona has revealed certain positives about the European system. As surprising as it seems the old continent still has a couple of tricks up it sleeves. First, the capacity of European health care infrastructure is quite resilient and has helped to keep the outbreak under control in comparison to countries like the US, Brazil, India, or Turkey. Second, the stickiness of firm/employer relationships has proved resilient in the face of an economic storm. While companies probably would have like to get rid of their employees as fast as possible during the lock-downs European labor law simply makes this harder to realize. On top of that, countries with short-time working policies that subsidies employees wages have seen moderate success in keeping consumer demand-driven economical activity up. Third, the less divided political & media environment. While politics and media have revealed negatives about the United State, the EU is alas being divided, far less so than the United States who are pre-occupied by the legacy of racial hierarchy and the last half-century of widening inequality. During this dire domestic situation the FED lowered its interests rates, bought bonds & stocks, and ventured into the unlimited printing of USDs, all to avoid an even deeper economic fallout. But the FED also had to consider its money supply to the rest of the world, with the USD being the world reserve currency. The FED is responsible to pump liquidity in global markets to avoid a liquidity crash and drying up economic activity in its entirety.This combination of domestic & international liquidity needs led the FED to print about 70% more money than the ECB has printed in EUR. Lastly, a weakened Dollar has been on the agenda of the Trump policy all along. A lower Dollar could potentially makes goods Made in USA more attractive to global buyers, bring manufacturing back to the US and create blue-collar jobs, whose recipients would all belong to Trump’s voter base.

Now, the CNY depreciating against the EUR is just a side affect from all of the above. The PBOC owns most of the USD denominated debt in the world and the CNY is in many ways tied to the USD. The US is Chinas biggest trade partner and the economy of the US stuttering under the pandemic, China eventually sees less growth on the US market for their domestic products. In the broader scheme China also sees massive headwinds in global trade outside the US due to Corona and the longterm geo-political issues. To name just a few, see the move to de-globalization of supply chains to bring back manufacturing of essential industries back to local markets, the escalating trade war that hasn’t even come close to meet the Phase I Deal agreements, the ban on information technologies like Huawei, TikTok, WeChat and E-games in the US, the UK and India, the flaring border conflicts in the South China Sea and on the India/China border as well as the tensions around China’s Belt & Road Initiative and the alleged debt-trap diplomacy in Africa and South East Asia.

On how to deal with social media specifically without erecting a version of China’s Great Firewall and reign in the excesses of monopoly platforms like FAANG. I expect a similarly transparency-driven approach from policy-makers for all information technologies going into this decade.

About the mistake of thinking we are in a “new Cold War”. From Beijing’s point of view, there was no end of history in 1989 with the fall of the iron curtain and the ensuing Western dominance. For China there is historical continuity, manifested in the Tienanmen Square massacres. Westerners only have a crude understanding of China’s ideology. We should not comfort ourselves with the thought that because nationalism is the main mode of Chinese politics today, Xi’s China is just a totalitarian regime. This article helps to grasp the history between the US and the CCP with it’s gigantic mission and novel socio-political experiment of enrolling one-sixth of humanity in economic participation and opportunity.

Update 9 on my new year’s resolutions You can only improve what you track and measure. Therefore, I journal my progress for my 2020 resolutions. There are hardly any more restrictions